Thousands of new trees thanks to RGF Staffing France

Headquartered in the Netherlands, RGF Staffing operates internationally, with a significant impact on the environment. As a company, our environmental awareness has sparked our desire to take responsibility for said impact. Our operating companies each contribute to our common goal in their own way. A good example is Start People France, part of RGF Staffing France, which is helping to plant 33,000 trees in its own country.

An investment that benefits the environment, biodiversity and the local economy

EcoTree is a sustainable forestry company that is digitizing and democratizing investment in local European forests and biodiversity. Its ground-breaking model is an opportunity for businesses to invest in the creation and maintenance of forests.

By partnering up with EcoTree, Start People France is funding the planting of more than 33,000 trees in France over the next five years. In March, Start People France planted its first tree in the heart of the Luthenay Forest in the French region of Bourgogne-Franche-Comté.

The future Start People forests will become carbon sinks, absorbing the emissions that the business cannot reduce or eliminate. They will also enable the reforestation of derelict areas and thus contribute to preserving French biodiversity. 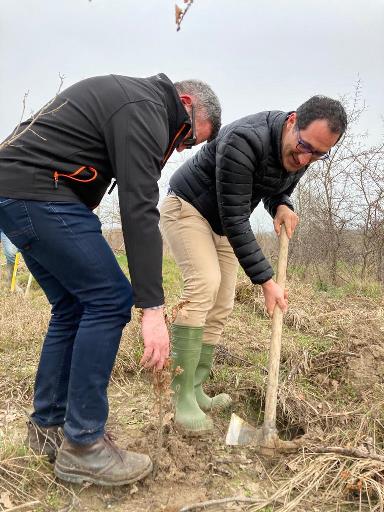 ‘A demonstration of sustainable economy’

Rob Zandbergen, CEO of RGF Staffing, is proud
of the major project undertaken by his
colleagues in France: "Start People France is demonstrating in concrete ways how they contribute to a more sustainable economy. As a global HR partner, RGF Staffing is well aware of our impact on the environment. That is why we take action and strive to reduce our negative impact on the environment by addressing
climate change, resource conservation and biodiversity conservation. One of our Five Material Matters is focused on conserving the environment, thereby contributing  Sustainable Development Goal 13 (Climate Action) of the United Nations."

To find out more about the EcoTree - Start People partnership: https://startpeople-ecotree.fr

Game-changing ideas from our own key talents
After a year of hard work and dedication, nine teams from our business units from around the world presented their their ideas during The CEO Challenge.
Harden the Cup Up Day
Today we join Chandler Macleod Group who is hosting Harden the Cup Up Day. ‘Harden the Cup Up Day’ is an initiative aimed at increasing education and awareness of the damage of single-use cups on the environment.
Guarding against unconscious bias with the Anonymous CV
We are proud to say that our own company, Unique, an employment placement agency in the Netherlands, implemented an ambitious effort to guard against unconscious bias.
Back to the overview >